If you want a home that’s clean, fresh, and comfortable, then you’ll want to keep air pollution at bay. Not only is indoor air pollution bad for your health but it’s even worse for the environment. The good news is there are many ways to eliminate pollutants, and some are more rewarding than others.

Think about how many breaths you take indoors, and the fact that whatever you breathe in becomes a part of you in some way for some time. That’s why it’s so important to keep your air clean, and below we have a few expert tips on how you can do just that.

Kicking Out the Cause

One of the best reasons to keep air pollution out of your home is so that you won’t need to take remedial action later. A simple step you could take is to make smoking an outdoor activity if you’re not doing so already. It doesn’t matter if a person smokes e-cigarettes or the regular kind, there are all kinds of compounds and chemicals present in cigarette smoke that can pose a serious threat to your health.

Cleaning supplies can also be detrimental to your wellness. You can tell just by taking a whiff of them that they’re packed with all sorts of harmful chemicals and ingredients. Now, we’re not saying you should stop cleaning your house, but what you can do is to use natural cleaning supplies. Also, cut down on the clutter in your home and if you can, remove or reduce the number of carpets and rugs in your house as they can also contribute to indoor air pollution. If that’s not an option for you, try to keep them clean as much as you can.

You’ve got to keep your furry family members clean too. Give them a nice bath on a regular basis and wash their bedcovers often. As for your human housemates and guests, maybe suggest they leave their shoes at the door. Shoes carry a lot of dust in, even after you’ve done a minute or two of moonwalking on your welcome mat.

The goal is to keep things as natural as possible when it comes to maintaining good air quality. It’s best not to use things like air fresheners and anything that’s meant to mask a smell for that matter. And while most scented candles come with pretty natural fragrances, it’s best to avoid them or use them in moderation.

A simple and easy way to keep your home free from pollution is to dust surfaces and vacuum as frequently as you can. Dust mites thrive in bedding so you’ll want to wash yours with hot water as frequently as possible. If you can’t quite get rid of the origin of the pollution immediately, at least seal it or close it off. 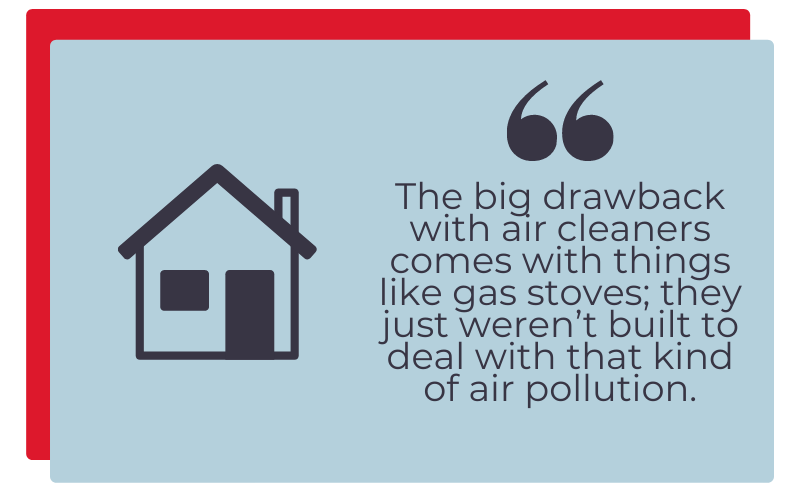 Abolish it with it Technology

While you’re able to sense a lot of the pollution going on in your space, some things just aren’t detectable with a pair of nostrils. Sometimes even trace amounts of air pollution can be enough to cause damage if you don’t keep it in check. You can use carbon monoxide detectors to keep track of such pollutants but as you can imagine; such things don’t come cheap and they don’t exactly last a lifetime.

Some people will have their car emissions tested every now and then and others will go as far as having their homes tested for radon, which is a naturally occurring radioactive gas known to cause cancer of the lungs. Air purifiers can also be used to sanitize your air, but you’ll have to consider running costs as well as the fact that this requires consistent maintenance.

Air purifiers have an air cleaner with a filtering element that’s meant to trap unwanted particles. Some are more effective at this than others and there are also differences between tabletop air cleaners and built-in air cleaners. The key with these things is to get the ones with highly efficient collectors and a high circulation rate. The big drawback with air cleaners comes with things like gas stoves; they just weren’t built to deal with that kind of air pollution.

As we’ve mentioned before, cleaning is very helpful in preventing air pollution in your home. The way you clean can also make a world of difference. For instance, instead of using a broom to sweep your floors, get a vacuum to suck everything up. That’s because brooms tend to send dust flying all over the place which makes the whole thing counterproductive.

A microfiber dusting cloth is your best option when it comes to wiping down surfaces, as cotton rags just don’t perform as well. In everything you do, remember to get rid of moisture. You don’t want stuff like mold building up in your house.

Most importantly, give your house a thorough cleaning as often as you can and get into those hard-to-reach places. Just because it’s hidden away, doesn’t mean it can’t end up in your face at some point. 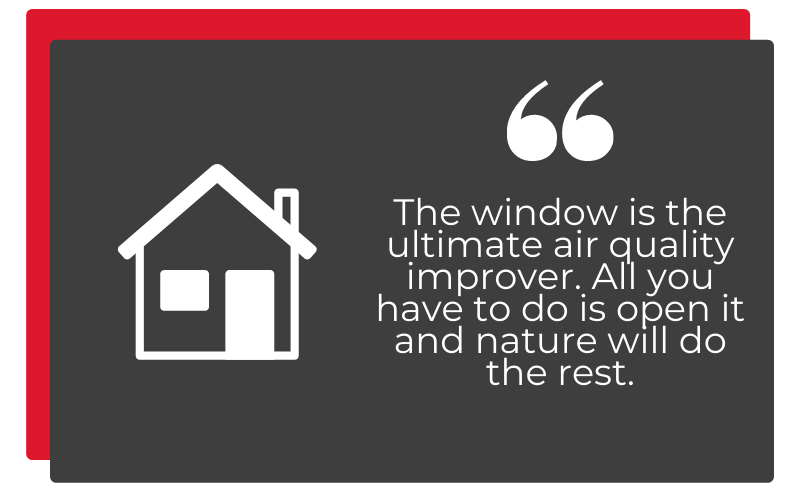 More often than not, gas can be a dangerous thing to have floating around in your house.  But, it doesn’t matter if you’re using a gas stove or an electric burner, you’ll probably have to deal with the same kind of contaminants from cooking.

To combat this, make use of the vents in your kitchen, and if you have any air ducts; get someone to check if they’re clean. A lot of waste can get caught up in those ducts and this can affect the air quality in your space.

If you happen to have an air conditioner in your home, it’s a good idea to change the filter. These filters can only take in so much, so at some point, they end up not being able to do their job. If you live close to an industrial area or a busy city, you’ll probably replace these filters more often than someone living in the countryside. In such cases, it’s advisable to get an air conditioning service plan which can cover more than just a filter change.

What if we told you there was a low-cost, low-maintenance way of preventing indoor air pollution in your home? It’s natural, simple, and it’ll even last as long as your house. The window is the ultimate air quality improver. All you have to do is open it and nature will do the rest.  You get a clean exchange of stuffy air for fresh air from the outdoors every time. 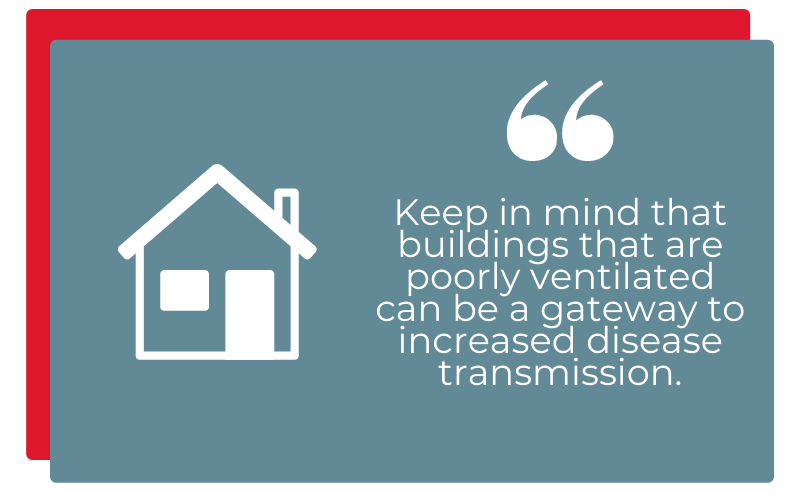 Controlling airflow is easy with windows, and the great thing about using windows to reduce air pollution is the choice. They come in all shades and forms, so you decide what kind of style you want to go with. You also get to pick your preferred type of glass, the frame, and even the type of insulation that you want applied to your windows. And if you don’t want neighbors peeking in, you can get your windows tinted.

Plus, you only have to buy a window once. After that; it’s just a matter of giving it a wipe-down every other day. The ROI on windows is one of the most desirable features and energy-efficient windows are gaining a lot of popularity for that very reason. They make it easier to control the temperature in your home so you won’t be spending too much money on heating or cooling the place. The newer your windows are and the more easily they open and close, the better.

Now, the grime that accumulates on old windows can leave you with a nitrous oxide problem, and at some point, you’ll need to think about getting replacement windows. The sooner you get this done, the better your indoor atmosphere is likely to be.

Windows can complement any HVAC system you have as they’ll constantly circulate fresh air into your house. They’ll also help to balance the equation when it comes to insulation. As much as you want to keep heat indoors when it’s cold, you still need proper ventilation.

Keep in mind that buildings that are poorly ventilated can be a gateway to increased disease transmission. Opening windows for just 10 minutes can change the quality of the air in your home. If you’ve got two windows facing each other, why not open them both to allow for a cross breeze? That way, one window lets the good air in, and the other lets the toxic air out.

It’s also a good idea to pop your windows open when cooking and cleaning, and as everyone spends more time indoors due to social distancing, it’s becoming increasingly important to make sure that you expose yourself to the cleanest air.

Out of all the mechanical and technological ways of combating air pollution, windows are the best because the rest don’t actually bring fresh air from outside into the house. That is significant because outdoor air is cleaner than indoor air according to the Environmental Protection Agency.

If the increased home value, improved home comfort and better security aren’t what draws you to high-quality windows, at least enhanced ventilation should.

Got a hankering for more awesome Demers Glass content? Check out our piece on The Undeniable Benefits of Airing Out Your House.